Included below are homes for sale in Atlanta. If you would like more information on any of these Atlanta real estate listings, just click the "Request More Information" button when viewing the details of that property. We can provide you with disclosures, past sales history, dates and prices of homes recently sold nearby, and more.

And, if you haven't already, be sure to register for a free account so that you can receive email alerts whenever new Atlanta listings come on the market.

As the heart of a populous metro area and the leader in economics, culture and entertainment for the region, the city of Atlanta sets the bar very high. Residents of Atlanta are fortunate to belong to such a dynamic city, and they have great pride in their city. With a prominent place in history and a glowing future, Atlanta is definitely the right place to be for those that want to be in the center of it all.

Atlanta real estate is second to none, and presents a broad spectrum of choices for home buyers from across the country. The rolling hills and well-planned neighborhoods highlight the fine homes for sale in Atlanta, and entice home buyers to settle down here. It’s true that Atlanta real estate is some of the most desirable in the state, and it doesn’t take long to see why.

The population of Atlanta is approximately 464,000 residents and it is the county seat of Fulton County. It was first established in the 1830s where two railroad lines intersected. The booming city was a prominent during the Civil War, and the Civil Rights Movement. Today, Atlanta is a thriving transportation hub with one of the top economies in the country. It is home to many major corporations, and major industries include higher education, high tech, communications and media, entertainment, and real estate. It is often ranked as one of the best places to start a business in the nation.

Atlanta is the heart of the greater metro area that encompasses more than 5 million people and it is set on a ridge along the Chattahoochee River. Atlanta is divided into several areas that have their own distinct histories and include Downtown, Intown, Midtown, Buckhead, Northwest, Southwest, Southeast and more. Notable neighborhoods in Atlanta include Castleberry Hill, Atlantic Station, East Atlanta, Blandtown, Benteen Park, Brookhaven, Oakland City, and more. Major roads that help residents get in and out of Atlanta include I-75, I-20, and I-285, among others. The Metropolitan Atlanta Rapid Transit Authority operates a commuter rail system and a public bus system for Atlanta residents. The Harstfield-Jackson Atlanta International Airport is the busiest in the world.

Atlanta residents have plenty of reasons to love living here, and the community amenities make it very worthwhile. Public schools are managed by the Atlanta Public School District and include more than 100 schools. Many higher education schools thrive here, such as the Georgia Institute of Technology, Georgia State University and Morehouse College. The city’s 343 parks are beautifully managed, and include world-class spaces like Piedmont Park, Woodruff Park, Grant Park, Chastain Park and more. A major daily newspaper, several TV station and more keep residents connected. Thriving retail districts, public art, an active recreation department and more provide residents of all ages with what they need to enjoy life in Atlanta.

Atlanta has plenty of things for residents to see and do any time of year. Historic sites include Martin Luther King Jr. National Historic Site, Margaret Mitchell House and Museum and the Atlanta Cyclorama and Civil War Museum. Other major attractions include the Georgia Aquarium, College Football Hall of Fame, National Center for Civil and Human Rights, Carter Center and the Atlanta Botanical Garden. Zoo Atlanta, Atlanta Dogwood Festival, Atlanta Film Festival, professional sporting events, and more fill up any extra time that residents might have.

Home buyers are definitely doing the right thing when they put Atlanta real estate as a priority. The top homes for sale in Atlanta don’t stay on the market for long, so home buyers shouldn’t hesitate.

Listings identified with the FMLS IDX logo come from FMLS and are held by brokerage firms other than the owner of this website and the listing brokerage is identified in any listing details. Information is deemed reliable but is not guaranteed. If you believe any FMLS listing contains material that infringes your copyrighted work, please click here to review our DMCA policy and learn how to submit a takedown request. © 2023 First Multiple Listing Service, Inc. 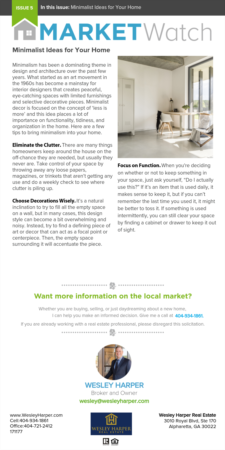 Have a Question or Want a Free Market Report?

Contact Me
Questions? We're Here to Help
Recently From Our Blog

Minimalist Ideas for Your Home

Have a Question or Want a Free Market Report?